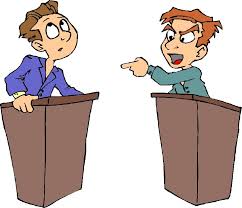 In September 2013 we established a Debating Club in Powerstown ETNS and enrolled in the Primary Debating Ireland League.

All children in the Sycamore Class were invited to join the Debating Club.

What is the Primary Debating Ireland League?

The objective of the Primary Debating Ireland League is to enrich the children’s cognitive and language abilities not to mention encouraging confidence, in ages ranging from 10-12 and classes in the senior end of the school (4th-6th).  For more information go to the website: http://www.primarydebatingireland.com.

The Sycamore Debating team are through to the semi finals – Round three of the Primary Debating Ireland League.

Our Debate is on Monday 13th January 2014. We are proposing the motion “ipads should replace all school books”.

Children have been preparing speeches and discussing the pros and cons of using ipads in the classroom. We feel there are definitely a lot more positive reasons for replacing school books with ipads. We hope the adjudicators will support and agree with our arguments! We are looking forward to meeting the opposing team – St Cillian’s National School in Bluebell!

Congratulations to the Sycamore Debating team who won their debate “Climate Change is not our problem”.

Round 2 was scheduled for Monday 16th December 2013 from 2pm – 3pm and we opposed the motion “Climate Change is not our problem.”

Powerstown ETNS hosted the debate so parents, friends and pupils were invited to be members of the audience.

The Sycamore class did lots of research and gaining a better understanding of Climate Change and its impact on our environment and our lives.

Here are some of the websites the children have been using to research.

Well done to our debating team and the Sycamore Class researchers! A great win, by just 5 points.

A big congratulations to our challengers. It was a very competitive debate.

For Round One of the Debating League the motion is ” Homework is a waste of time.” Our opponents are Castleknock National School and the debate is scheduled for 27th of November at 2pm. We are supporting the motion.

(Speeches, videos and photos to be uploaded)