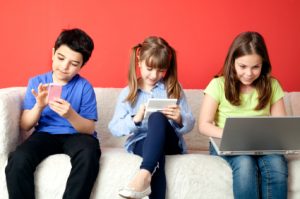 Don’t allow TVs, computers or any screen-based device into a child’s bedroom. Sigman relates that he has spoken to many parents who have regretted allowing screens into bedrooms and feel removing them later is harder than refusing them in the first place. Even though it may be difficult, you should take the screens away from the bedroom. Otherwise you risk your child’s cognitive and physical health.

Most parents haven’t devised screen-time protocols for their children, and need to create media-free zones in their homes, banish TV dinners, and put away their own digital devices when communicating with their children, he urges.

Sigman debunks the notions that children who have little screen time will be less likely to learn as much as those who do enjoy unlimited time in front of computers or the TV. They also won’t rebel later in life.

Technology is a tool for learning, not the end in its own right.

Ever catch yourself checking your email, using your smartphone or watching TV while your child is trying to talk to you? Stop using the device and communicate with your child face to face. This will help establish empathy and also set a good example of the child.

The parent is a child’s primary role model, and sticking the kids in front of a screen is an example of what is known as benign neglect.

Don’t have all meals in front of the TV, and don’t keep reaching for your smartphone while in front of the child. It tells the child that constant screen time is acceptable. And it will do you good, too!

Engage in their world

Spend some time with your child online – look at the sites, games or YouTube videos they are watching. You need to understand your child’s online life.

It might sound sexist but Dr Sigman claims that a mother’s nagging – “maternal monitoring” in nicer terms – is the best way to get children to change their behaviour. Dads need to enforce the rules, too.

You may not realise it but passive viewing is ruining your child’s concentration. A child’s attention will wander if you’re watching the TV news in another part of the room.

Take an average week and look at how much screen time your child, and indeed the whole family, is subjecting themselves to. Add up the favourite TV shows, smartphone and tablet app play, Internet browsing and video games, and that two hours is filled up very quickly.

Screen time often leads to over stimulation so take breaks to calm down a child’s brain. See our time guidelines earlier in this feature.

Multitasking is for adults, not children. Deep concentration in kids will lead to better, more creative thinkers. Research suggests that trying to get children to multitask actually makes them worse at multitasking because they don’t learn effective concentration skills.

No screens before bedtime

Take a gap between screen time and sleep. Most screens these days use LCDs that emit a blue light that inhibits sleep and disrupts the circadian rhythm (body clock). Remember that the bedroom is not an entertainment centre. It’s the place children go to sleep.

To help children access their creativity and self determination get them to create a list of the sorts of things they’d like to do when not allowed to go to a screen. Stick the list on the fridge. Then when the child complains they have nothing to do you can refer them to the list, or add more to it.

Use screens to combat screen time

Use the wealth of the Internet to help you wean your kids off the screen. There are plenty of art projects online, cooking tips, gardening, science experiments… you name it there’s plenty of online tutorials that should translate into time away from the screen.

Dr Sigman is a big believer in what he calls the “gift of boredom”. He rubbishes the idea that the worst thing that can happen to a child is for he or she to be bored. Children, he says, need to learn how to deal with boredom. Being over stimulated is worse than being bored. Learning to cope with being bored leads to greater self sufficiency, and less risk that children later become addicted to unhealthy activities to fill such gaps.

Physical activity. Screen time is usually sedentary so getting the child up and moving is by far the healthier option. The latest scientific research actually suggests that screen-time sitting is worse for one’s health than standard sitting because of the over-stimulation that screen time induces in the user.

If you must use gadgets maybe invest in an activity tracker, from the likes of Fitbit or Jawbone. See Best Activity Trackers. There’s even an Leapfrog activity tracker for very young children.

Being fitter, however, does not take away the harmful effects of screen time. Even keep-fit enthusiasts suffer ill effects of spending too much time sitting down.

The Journal of the American College of Cardiology ran a study in Scotland that found that “recreational sitting, as reflected by television/screen viewing time, is related to raised mortality and cardiovascular disease risk regardless of physical activity participation.”

Increased physical activity is, of course, beneficial but it doesn’t mean you won’t suffer an increased risk of death from over-doing your screen time.

So reduce hours of screen time by replacing with more physical activity, not just getting fitter while still spending too much time in front of the telly, computer or games console.

Hours of sedentary behaviour is linked not only to obesity, but other health problems such as type 2 diabetes, cardiovascular disease and stroke. While you’re thinking of how much time your kid is sitting down in front of a screen, do yourself a favour and have a walk about yourself.

Get outside. Suggesting going for a walk isn’t going to cut it, so make the activity fun: tree climbing, hide-and-seek in a wood, or camping.

Social activity. Don’t fool yourself that being on Facebook all day is social. It’s vital that kids get out and interact with other children in real life and not in phony virtual worlds.

Hobbies. It might not feel like it sometimes but children are very good at working out ways of filling their time when they have to, and finding out some stimulating hobbies – art, craft, fishing, sports, Lego, kites, collecting, bird watching, astronomy, cooking, museums, photography, music, gardening, etc – shouldn’t be too difficult.

Do the chores. You’re kidding, right? But kids should help out round the house, tidy up after themselves, learn some basic cooking, lay the table, empty the dishwasher, hang out the clothes… It might be boring but it does create a break from the screen.