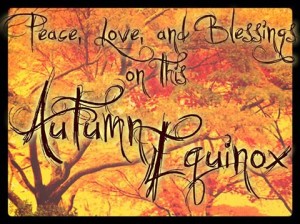 We hope all her Pagan and Wiccan families and friends enjoy the Autumnal Equinox today.

The autumnal equinox ushers in equal day and night around the globe, and for Pagans and Wiccans, this celestial event brings Mabon—the second harvest festival. As the Earth’s subsolar point crosses the Equator, the planet begins moving southward, increasing darkness in the Northern Hemisphere and light in the Southern Hemisphere. Wiccans use Mabon (or Ostara, in the Southern Hemisphere) as an opportunity for thanksgiving: to welcome the impending dark, to give thanks for the long hours of sunlight of summer and to rejoice in the current bountiful harvest. Spicy mulled wines, crisp apples and warming cider are offered and consumed.

The autumn equinox (the first day of autumn 2016) occurs on Thursday September 22.

The equinox happens when the equator passes the centre of the sun. This is when the north and south poles of the Earth are not tilted towards or away from the sun, as at other times, but are aligned so as to give, theoretically, the same amount of daylight in both of the Earth’s hemispheres.

Why is it called ‘Equinox’?

Since night and day are nearly exactly the same length – 12 hours – all over the world the event is called the equinox, which in Latin, literally means ‘equal night’ (equi – equal and nox – night).

In reality though, equinoxes do not have exactly 12 hours of daylight.Solstices and equinoxes mark key stages in the astronomical cycle of the earth.

In a year there are two equinoxes (spring and autumn) and two solstices (summer and winter).

The dates of the equinoxes and solstices aren’t fixed due to the Earth’s elliptical orbit of the sun.

The Earth’s orbit around the sun means that in early January, the sun is closest (known as perihelion) and in early July it is most distant (aphelion).

After the autumnal equinox, the days get shorter and the nights get longer. Traditionally it signified when the farmers bought in the harvest, which perhaps explains why the full moon nearest the equinox is often called the harvest moon.

The pagan festivities around this event were replaced on the Christian calendar with Michaelmas, the feast of Saint Michael the Archangel, which is celebrated on September 29.

There are two equinoxes – the spring equinox, around March 21, and the autumn equinox – around now.

What happens on an equinox?

The Earth’s axis always tilts at an angle of about 23.5° in relation to the ecliptic, i.e the imaginary plane created by the Earth’s orbit around the Sun.

On any other day of the year, either the Northern Hemisphere or the Southern Hemisphere tilts a litte towards the Sun but on the two equinoxes, the tilt of the Earth’s axis is perpendicular to the Sun’s rays.

The equinox happens at exactly the same time around the world.The equinox occurs at the exact moment the Sun crosses the celestial equator – the imaginary line in the sky above the Earth’s Equator – from south to north.

At this moment, the Earth’s axis is neither tilted away from nor towards the Sun.