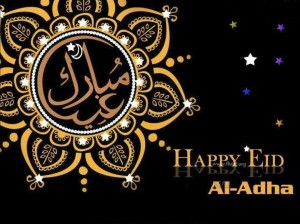 Happy Eid Al-Adha to all our Islamic pupils, families and friends. We hope you all enjoy this holiday (15th October 2013).

Eid al-Adha, also known as the Greater Eid or the Festival of Sacrifice, is an important Muslim festival commemorating Abraham’s willingness to sacrifice his only son Ishmael.
It marks the end of the Hajj pilgrimage, and is celebrated with visits to family and friends, a fine meal (usually lunch or a late breakfast), fine new clothes, and giving gifts or money to children. Eid al-Adha will next be celebrated on 15th October 2013.

The story of Ibrahim’s sacrifice

Eid-ul-Adha celebrates the occasion when Allah appeared to Ibrahim in a dream and asked him to sacrifice his son Isma’il as an act of obedience to God.

The devil tempted Ibrahim by saying he should disobey Allah and spare his son. As Ibrahim was about to kill his son, Allah stopped him and gave him a lamb to sacrifice instead.

Note: This story is also found in the Jewish Torah and the Christian Old Testament (Genesis 22). Here God asked Abraham to sacrifice his son Isaac, his son with Sarah. Isma’il was his son with Hagar.

Eid ul Adha is a public holiday in Muslim countries and is celebrated on 15th of October 2013.

Today Muslims all over the world who can afford it , sacrifice a sheep (sometimes a goat) as a reminder of Ibrahim’s obedience to Allah. In Britain, the animal has to be killed at a slaughterhouse.

They share out the meat among family, friends and the poor, who each get a third share.

Eid usually starts with Muslims going to the Mosque for prayers, dressed in their best clothes, and thanking Allah for all the blessings they have received.

It is also a time when they visit family and friends as well as offering presents.

At Eid it is obligatory to give a set amount of money to charity to be used to help poor people buy new clothes and food so they too can celebrate. 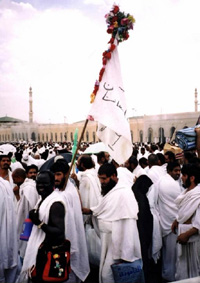 The Hajj is pilgrimage to Makkah.

It is the Fifth Pillar of Islam and therefore a very important part of the Islamic faith.

All physically fit Muslims who can afford it should make the visit to Makkah, in Saudi Arabia, at least once in their lives.

Every year around 2 million Muslims from all over the world converge on Makkah.

They stand before the Kaaba, a shrine built by Ibrahim praising Allah together.

The Hajjis or pilgrims wear simple white clothes called Ihram which promote the bonds of Islamic brotherhood and sisterhood by showing that everyone is equal in the eyes of Allah.

During the Hajj the Pilgrims perform acts of worship and they renew their faith and sense of purpose in the world.