Powerstown Educate Together National School wishes to invite you to our “Flag Raising Ceremony” on Friday 20th of September 2013. This is a very special occasion for the school as we will raise our first “Green Schools Flag” and the European Flag which we were awarded for our participation in the “Blue Star Programme”.

As a small, developing school in existence for just two years these awards are a true reflection of the hard work and dedication of our pupils, parents, staff and school community. To achieve a Green School Flag it requires a minimum of two years participation in the Green School Programme. Students, parents, staff and the school community have conscientiously implemented our Green School Plan since our opening on 1st of September 2011 to meet the Green Schools criteria in May 2013. In 2012 we enrolled a mixed senior class of just 13 pupils from 1st to 4th class. These pupils undertook the challenge of participating and co-ordinating the Blue Star Programme throughout the whole school. Pupils, parents, staff and school community worked tirelessly together on cultural and academic projects and exceeded the requirements to achieve the Blue Star Flag in June 2013.

We are looking forward to sharing our knowledge and celebrating our achievements with our school community and friends on September 20th at 11am. The ceremony will be interactive and will acknowledge the children’s participation in the Green Schools Programme and the Blue Star Programme. Each class will do an individual performance and there will also be a whole school performance. The Student Council and Green School Committee will have a prominent role in the organisation of the event. 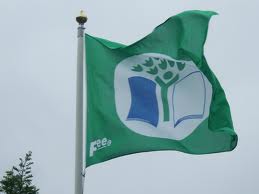 For the last two years we have worked conscientiously on Waste Management, Recycling and starting our School Garden.  Our Green School’s Committee was established in 2012, with pupils being elected democratically. All classes from Junior Infants to fifth class have representatives on the Green School’s Committee. As a small, developing school, children, parents, staff and the school community had to work exceptionally hard to reach the Green School’s Flag criteria. It is a huge accomplishment for the school to achieve the Green Flag in just two years. 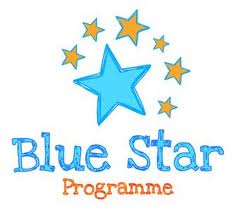 Last year our pupils and staff decided to participate in the Blue Star Programme. This was co-ordinated by our mixed grade senior class (1st – 4th class with just 13 pupils), with Junior and Senior Infants also participating in the programme. Parents and the school community were heavily involved as guest speakers, event organisers and supporting children with their research and projects.

Our mixed grade class made field trips to the European Commission, interviewed M.E.Ps and learned all about Democracy. The children studied the history of Europe, including World War 2 and the establishment of the European Union by Jean Monnet and Robert Schuman 63 years ago. They completed individual projects of countries in the E.U and individual history projects on European individuals for example Anne Frank and Italian artist Michelangelo.  The children truly were a wealth of knowledge for our Europe Day celebrations on 9th of May 2013.

A tremendous amount of work went into our Blue Star Programme, and we are delighted to acknowledge the work of our school community through the raising of the European Flag outside our school.

View all posts by: admin