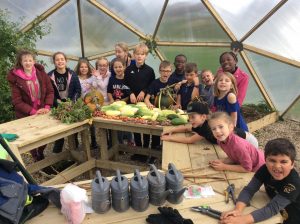 Our first Geodome Harvest was the congratulatory task of our newly appointed Forest School and School Garden Committee, and what a harvest it was.

Vegetables were shared amongst all classes to give the children a taste!

Harvest festival around the world!

In North America, Canada and the US each have their own Thanksgiving celebrations in October and November.

In Ireland and Britain, thanks have been given for successful harvests since pagan times. Harvest festival is traditionally held on the Sunday near or of the Harvest Moon. This is the full Moon that occurs closest to the autumn equinox (22 or 23 September). The celebrations on this day usually include singing hymns, praying, and decorating churches with baskets of fruit and food in the festival known as Harvest Festival, Harvest Home, Harvest Thanksgiving or Harvest Festival of Thanksgiving.

In British and English-Caribbean churches, chapels and schools, and some Canadian churches, people bring in produce from the garden, the allotment or farm. The food is often distributed among the poor and senior citizens of the local community, or used to raise funds for the church, or charity.

In the United States, many churches also bring in food from the garden or farm in order to celebrate the harvest. The festival is set for a specific day and has become a national holiday known as Thanksgiving which falls on the fourth Thursday in November in the US and second Monday Of October, in Canada. It has also become a national secular holiday with religious origins, but in Britain it is both a Church festival giving thanks to God for the harvest and a more secular festival remembered in schools.

Harvest festivals in Asia include the Chinese Mid-Autumn Festival (中秋節), one of the most widely spread harvest festivals in the world. In Iran Mehrgan was celebrated in an extravagant style at Persepolis. Not only was it the time for harvest, but it was also the time when the taxes were collected. Visitors from different parts of the Persian Empire brought gifts for the king all contributing to a lively festival. In India, Makar Sankranti, Thai Pongal, Uttarayana, Lohri, and Magh Bihu or Bhogali Bihu in January, Holi in February–March, Vaisakhi in April and Onam in August–September are a few important harvest festivals.