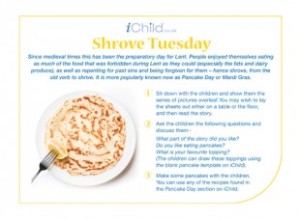 Shrove Tuesday is a Christian celebration and is on the 9.2.2016

Shrove Tuesday is the day before Lent starts: the Tuesday before Ash Wednesday. It’s a day of penitence, to clean the soul, and a day of celebration as the last chance to feast before Lent begins.

But there’s more to Shrove Tuesday than pigging out on pancakes or taking part in a public pancake race. The pancakes themselves are part of an ancient custom with deeply religious roots.

Shrove Tuesday gets its name from the ritual of shriving that Christians used to undergo in the past. In shriving, a person confesses their sins and receives absolution for them.

When a person receives absolution for their sins, they are forgiven for them and released from the guilt and pain that they have caused them.

In the Catholic or Orthodox context, the absolution ispronounced by a priest.

This tradition is very old. Over 1000 years ago a monk wrote in the Anglo-Saxon Ecclesiastical Institutes:

In the week immediately before Lent everyone shall go to his confessor and confess his deeds and the confessor shall so shrive him.

Shrove Tuesday is a day of celebration as well as penitence, because it’s the last day before Lent.

Lent is a time of abstinence, of giving things up. So Shrove Tuesday is the last chance to indulge yourself, and to use up the foods that aren’t allowed in Lent.

Giving up foods: but not wasting them

During Lent there are many foods that some Christians – historically and today – would not eat: foods such as meat and fish, fats, eggs, and milky foods.

So that no food was wasted, families would have a feast on the shriving Tuesday, and eat up all the foods that wouldn’t last the forty days of Lent without going off.

The need to eat up the fats gave rise to the French name Mardi Gras (‘fat Tuesday’). Pancakes became associated with Shrove Tuesday as they were a dish that could use up all the eggs, fats and milk in the house with just the addition of flour. 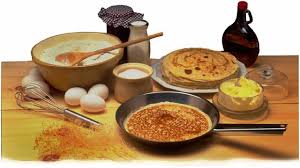 The origin of pancake racing

Pancake races are thought to have begun in 1445. A woman had lost track of the time on Shrove Tuesday, and was busy cooking pancakes in her kitchen.

Suddenly she heard the church bell ringing to call the faithful to church for confession. The woman raced out of her house and ran all the way to church; still holding her frying pan and wearing her apron.

Going for gold in the pancake Olympics

One of the most famous pancake races is held at Olney in Buckinghamshire over a 415 yard course. The rules are strict; contestants have to toss their pancake at both the start and the finish, as well as wearing an apron and a scarf. The race is followed by a church service.

Since 1950 Olney has competed with Liberal in Kansas, which holds an identical race, to see which town can produce the fastest competitor. After the 2000 race, Liberal was leading with 26 wins to Olney’s 24.