The season months have changed by the Ash Class 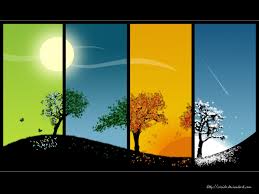 Did you know that the months of our seasons have changed? We found out today that December to February is winter, March to May is spring, June to August is summer and September to November is autumn.

This was news to us! So we investigated. We decided we would email Met Éireann to find out more information, to make sure our facts were correct.

Hello Met Eireann! We are the Senior Infants class in Powerstown ETNS. We have been learning about the weather and seasons. We thought that Summer started on 1st May but your website tells us that it starts on 1st June? Can you tell us why and when this changed? We are really confused and interested to know! Thank you, The Ash Class

The change from winter to spring or from summer to autumn is gradual and the general trend is subject to reversals which may last for weeks or more. Nevertheless, mainly on the basis of air temperature, a common grouping for seasons in the meteorological practices of many countries in the mid to northern latitudes, including Ireland, is as follows: December to February – winter, March to May – spring, June to August – summer and September to November – autumn.

The Seasons are divisions of the year which relate to the annual changes in the weather. The classical division into the four seasons – Spring, Summer, Autumn and Winter – derives from the weather pattern in middle latitudes where the onset of growth in plants and the reawakening of nature from a period of stasis can be separated from the hot season, when crops ripen and trees lose their leaves, and the cold season. At other latitudes such a division is not appropriate.

Astronomically the arrangement of the planes of the orbit of the Earth and its equator are such that the planes intersect at two times, the Equinoxes, when the length of the day and night are equal. Mid-way between these are the Solstices, when the Sun is at its highest and lowest in the sky at mid-day. These times can be determined very accurately and, as they occur near the times when the seasons are changing, have been used to indicate the start of each season. Thus Spring is deemed to start at the Vernal Equinox (near March 21), Summer at the Summer Solstice (near June 21), Autumn at the Autumn Equinox (near September 21) and Winter at the Winter Solstice (near December 21). In the southern hemisphere the cycle is displaced by half a year.

Historically it was widely observed in Ireland that St. Brighid’s day marked the beginning of spring. Originally this was the pagan festival Imbolc, celebrating the new year on the farm. This festival marked the passage from the dark half of the year to the bright half. Most commonly it was held on 1 February, or about halfway between the winter solstice and the spring equinox.

The use of these astronomically defined dates for the start of the seasons is due, in the main, to the need, seen by diary manufacturers and quiz masters and the like, for definitive dates. In reality there are no hard and fast criteria to determine the start of each season; the onset of Spring, for instance, could be the date on which the first daffodil is seen or the first birds make their nests or some such criterion. The dates of nearly all of these are not only extremely difficult to determine but also vary quite dramatically.