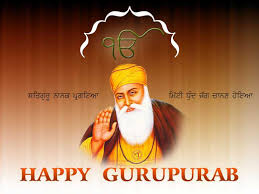 On Monday, 14/11/2016, Sikhs around the world will be marking one of their religion’s most sacred festivals. Guru Nanak Jayanti, or Gurpurab, is the birthday of the first Sikh guru, Guru Nanak.

There’s plenty to know about the festival.

Who Was Guru Nanak?

Guru Nanak Dev Ji was born in 1469, making 2016 his 547th birthday, in what is now the Punjab province of Pakistan, around 40 miles from the capital Lahore. Nanak was raised as a Hindu by his family and also studied Islam. However, he came to reject many of the outward customs of both religions, such as pilgrimages, and the striving for mukti, or liberation from the cycle of life and death. Instead, he believed purely in a spiritual relationship with God.

Already believed by some to have divine qualities, at the age of 30, and though married with children, Nanak embarked on a spiritual journey that encompassed much of South Asia, Tibet and Arabia and lasted for 30 years. He spoke of his rejection of Hinduism and Islam and the caste system, emphasizing spiritual fulfillment open to everyone through strong moral values. With that Sikhism was born and Nanak became the first of the 10 Sikh guru.

Guru Nanak was actually born on April 15. However, his birthday is celebrated according to the Hindu lunar calendar, usually falling in November. It always occurs on the first full moon day in the Hindu month of Kartik.

How Is Guru Nanak’s Birthday Celebrated?

Celebrations begin the day before Guru Nanak’s birthday with processions held throughout India and other parts of the world with significant Sikh populations. During these processions, men perform the Sikh martial art form of Gatka, while hymns are also recited. The day itself is a government holiday in India and Sikhs begin marking Guru Nanak’s birthday as early as 4 or 5 a.m., with singing of hymns. A communal lunch, known as langar, is then offered free to everyone. The day concludes with late-night prayer readings.

Some Sikhs also undertake pilgrimages to Pakistan to mark Guru Nanak’s birthday, something that has attracted extra attention this year due to the rising tensions between India and Pakistan. Still, earlier this week the Pakistan High Commission announced that it had issued 3,316 visa for Sikh pilgrims.