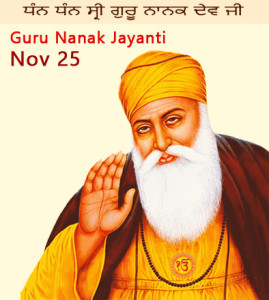 Happy Guru Prab to all our Sikh families and friends.

Guru Nanak Jayanti – Guru Nanak Jayanti or Gurpurab is one of the most revered day observed by the Sikh community to glorify the tenets of Sikhism. Guru Nanak Jayanti commemorates the birth of Guru Nanak, the first Sikh Guru. Both in the literal sense and In essence, Gurpurab means ‘festival of the gurus’. The historic day is celebrated across the world by devout Sikhs with great fervor and collective spirit and effort, asserting the message of morality, hard work and truth inherent in the preachings of Guru Nanak. Owing to the fact that Guru Nanak enlightened the world with his profound teachings, the day is also known as ‘Prakash Utsav’.

Gurupurab rituals and ceremonies
A series of ceremonial rituals begin ahead of the actual day celebrations of Guru Nanak Jayanti. The first day activities involve Akhand Paath, which refers to a 48-hour uninterrupted reading of the Sikh scripture Guru Granth Sahib two days before Guru Nanak Jayanti at Gurdwaras and even at homes. To mark the occasion, Gurudwaras are also decorated with flowers and lights.

On the second day, Prabhat Pheris, (prabhat meaning ‘early morning’ and pheris meaning rounds) are conducted. Sikhs devotees visit early morning at the Gurdwara and start chanting hymns from the Guru Granth Sahib. A huge procession is organized which is also called ‘Nagar kirtan’ with five armed guards called ‘Panj Pyaras’ fronting it. The devotees holding Sikh flags called ‘Nishan Sahib’, march along with a decorated palanquin carrying the holy scripture of the Sikhs Guru Granth Sahib, as sacred quotes and hymns from the scripture fill the air amidst the resounding drum beats by local bands. As the procession heads towards the streets, people pay obeisance to the pious Guru Granth Sahib and partake of the blessed atmosphere. A team of Sikh people attired in traditional clothes, brandishing traditional weapons play ‘Gatka’ as they display their skills in sword fighting and martial arts.

On the third day, that is, the actual day of Guru Nanak Jayanti, the festivities begin with the recital of Asa-di-Var (morning hymns) early morning. Poems, hyms and quotes are read out that uphold Guru Nanak’s exemplary life. This is followed by the ‘katha’ or exposition of the Guru Granth Sahib, along with discourses and insightful lectures. Kirtan-Darbars or special assemblies are also conducted. After this, a ‘langar’ or community kitchen is organized wherein volunteers serve food with full devotion to people of the Sikh community as well as other communities also. A sweet ‘Karah Prasad’ is also served. Some Gurdwaras also hold night prayers or rehras. 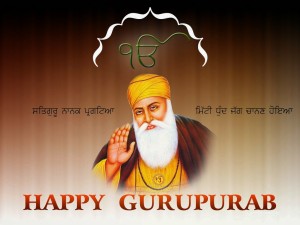 Celebrations
Nankana Sahib, the birthplace of Guru Nanak becomes the hub of activity much before the auspicious day arrives. Special arrangements are made with the support of the managing committee and the state government, as Sikh pilgrims arrives in huge numbers from India, Europe and the U.S. to participate in the activities of the holy day and seek blessings. During Guru Nanak Jayanti, the Golden Temple in Amritsar, India also sees a constant stream of devotees from everywhere. It is lit up beautifully and offers a most awe-inspiring sight. Gurudwaras in the Punjab, Haryana and Chandigarh especially come alive with air of festivity and spirit of inner joy that emanates from the congregation. Elaborate arrangements are made for ‘langar’ as lakhs of devotees are served food by volunteers and people who wish to immerse themselves in ‘seva’ or service to humanity. The distribution of ‘Karah Prasad’ is also looked forward to by the people. Special programs are organized and religious music and kirtans keep a mystical and blessed atmosphere. After the langar, a prayer session takes place. Since Guru Nanak’s birth was after midnight, the celebrations also go on past midnight.