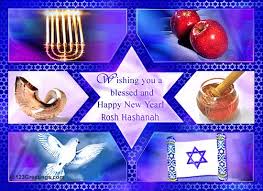 Rosh Hashanah (Hebrew: ראש השנה), (literally “head of the year”), is the Jewish New Year. It is the first of the High Holidays or Yamim Noraim (“Days of Awe”), celebrated ten days before Yom Kippur. Rosh Hashanah is observed on the first two days of Tishrei, the seventh month of the Hebrew calendar. It is described in the Torah as יום תרועה (Yom Teru’ah, a day of sounding [the Shofar]).

Rosh Hashanah, the Jewish new year, is a fall holiday, taking place at the beginning of the month of Tishrei, which is actually the seventh month of the Jewish year (counting from Nisan in the spring). It is both a time of rejoicing and of serious introspection, a time to celebrate the completion of another year while also taking stock of one’s life.

The two days of Rosh Hashanah usher in the Ten Days of Repentance (Aseret Yemei Teshuvah), also known as the Days of Awe (Yamim Noraim), which culminate in the major fast day of Yom Kippur, the Day of Atonement. The Days of Awe represent the climax of a longer process. Starting at the beginning of the previous month, called Elul, the shofar is traditionally sounded at the conclusion of the morning service. A ram’s horn that makes a trumpet-like sound, the shofar is intended as a wake-up call to prepare for the Tishrei holidays. One week before Rosh Hashanah, special petitionary prayers called Selichot are added to the ritual. Rosh Hashanah itself is also known as Yom Hadin or the Day of Judgment, on which God opens the Books of Life and Death, which are then sealed on Yom Kippur.

The origins of Rosh Hashanah may be sought in a royal enthronement ritual of biblical times, though the Bible itself never mentions the “New Year” or “Day of Judgment” aspects of the holiday. Even though Rosh Hashanah falls in the seventh month, later rabbinic tradition decided to designate it the beginning of the year. Although the origin of this tradition may have been adopted from the Babylonians, the rabbis imbued it with Jewish significance as the anniversary of the day on which the world was created, or of the day on which humanity was created. Another explanation can be found in the significance of Tishrei as the seventh month, hence the Sabbath of the year.

The challah (traditional bread) that is eaten for the Rosh Hashanah season is round, symbolizing the eternal cycle of life. The challah is traditionally dipped in honey, symbolizing the hopes for a sweet New Year. The same is done with apples, which are made even sweeter with the addition of honey. Some people avoid eating nuts at this time, since according to a somewhat convoluted Gematria(mystical numerical interpretation) the Hebrew words for nut (egoz) and sin (het) have the same numerical value.