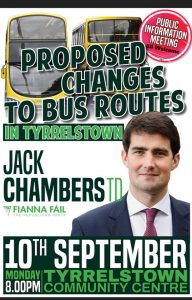 Local TD Jack Chambers is having a public meeting with Tyrrelstown residents to discuss proposed changes to our bus routes!

Some of these are local only routes and will not travel into the city centre meaning many commuters would be required to switch buses. This would ultimately increase commuter times.

This plan is open to a public consultation process and it is important that residents make their views known on the proposed changes. Jack Chambers is hosting a public meeting in Tyrrelstown Community Centre at 8pm on Monday 10th September to illustrate the proposed changes with maps and route frequencies. He will also explain how to make a submission as part of the public consultation process.