Happy Al-Hijra to all our Islamic Families and Friends 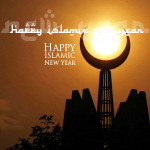 In the Islamic religion, Al-Hijra – the New Year – is celebrated on the first day of Muharram, the month in which Muhammad emigrated from Mecca to Medina in 622 CE (the Hijra). The holiday is also known simply as Muharram. Islamic years are calculated from 1 Muharram, 622 CE. They are followed by the suffix AH, which stands for “After Hijira” or Anno Higirae (Latin). In 2005, Al-Hijra falls on February 10, 2005, which will be 1426 AH.

Unlike the important holidays of Eid al-Fitr and Eid al-Adha, there are few rituals associated with Islamic New Year. There are no prescribed religious observances. Most Muslims regard the day as a time for reflection on the Hijira and on the year to come. In modern times, some Muslims exchange greeting cards to celebrate the holiday.

What happens during Muharram?

Different Islamic denominations – Shi’a and Sunni – and cultures do different things to mark Muharram. Fasting varies among different Muslim communities. Some Muslims fast on or around the 10th day of Muharram, also known as the Day of Ashura, to mourn the death of the Prophet Muhammad’s grandson Husayn ibn Ali. Some mosques have free meals (nazar) around the ninth to 11th days of Muharram.

In Iraq, some Shi’a Muslims make a pilgrimage to the Imam Husayn Shrine, on the site of the grave of Husayn ibn Ali. In Iran, taziya(ta’zieh) or Condolence Theater are performed. During Muharram, these take the form of re-enactments of the battle of Karbala. In south Asia, similar events are known as such as marsiya, noha andsoaz, tabuik or tabut. In Jamaica and Trinidad and Tobago, they are known as Hosay or Hussay and are attended by people from a variety of religions and cultures.

Shi’a Muslims, particularly those in Afghanistan, Bahrain, India, Iraq, Lebanon and Pakistan, take part in remembrance parades or matam (matham). During matam, men gather in large groups on the streets to take part in ritual chest beating. Some people also beat themselves with zanjir (metal chains fixed into handles), but this practice is controversial and has been banned by some civic and Islamic authorities.

The Islamic New Year is a public holiday in places such as (but not exclusive to) India, Indonesia, Jordan, Malaysia, and the United Arab Emirates. It is not a nationwide public holiday in countries such as Australia, Canada, the United Kingdom or the United States. However, Islamic businesses and organizations may have altered opening hours and there may be some congestion around mosques, particularly in the evening and at night.

A year lasts for about 354 days and consists of 12 months in the Islamic/Hijri calendar. As the first month of the year, Muharram known as the month of remembrance and it is believed to be the most sacred month. Muslims are not allowed to fight during Muharram. Some important Islamic historical events that happened during the month include: