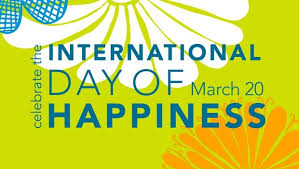 The General Assembly of the United Nations in its resolution 66/281 of 12 July 2012 proclaimed 20 March the International Day of Happiness recognizing the relevance of happiness and well-being as universal goals and aspirations in the lives of human beings around the world and the importance of their recognition in ..

It is coordinated by Action for Happiness, a non-profit movement of people from 160 countries, supported by a partnership of like-minded organisations. A profound shift in attitudes is underway all over the world. People are now recognising that ‘progress’ should be about increasing human happiness and wellbeing, not just growing the economy.

March 20 has been established as the annual International Day of Happiness and all 193 United Nations member states have adopted a resolution calling for happiness to be given greater priority.

In 2011, the UN General Assembly adopted a resolution which recognised happiness as a “fundamental human goal” and called for “a more inclusive, equitable and balanced approach to economic growth that promotes the happiness and well-being of all peoples”.

In 2012 the first ever UN conference on Happiness took place and the UN General Assembly adopted a resolution which decreed that the International Day of Happiness would be observed every year on 20 March. It was celebrated for the first time in 2013.