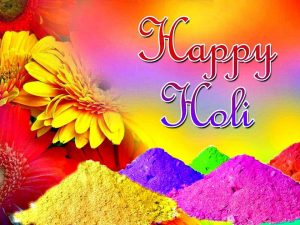 Happy Holi to all our Hindu families and friends.

Holi is the Hindu celebration of spring.

Holi is a major festival in the Hindu religion. It is celebrated on the day after the last full moon of the Hindu month of Phalguna. Phalguna falls between late February and early March in Western calendars. Holi usually marks the happy transition from harsh, dark winter to brighter, warmer springtime.

Holi celebrates the Hindu story of Prahlada. Prahlada was a prince dedicated to the worship of Vishnu, a major Hindu god. Prahlada’s father and aunt opposed his religious faith, and as punishment made him sit in the middle of a raging bonfire. Vishnu protected Prahlada, and the prince did not burn.

Bonfires remain a part of Holi rituals today. However, the most striking aspect of the festival is the spraying of brightly colored powders and water in enormous public celebrations. The colors mark both Prahlada’s flickering bonfire and the bright colors associated with spring.

The “Festival of Colors” is also a time for Hindus to relax social codes. Barriers between rich and poor, men and women, young and old are broken down by Holi’s bright colors. A familiar saying is bura na mano, Holi hai—don’t be offended, it’s Holi! 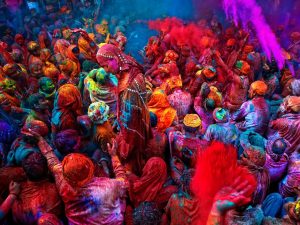