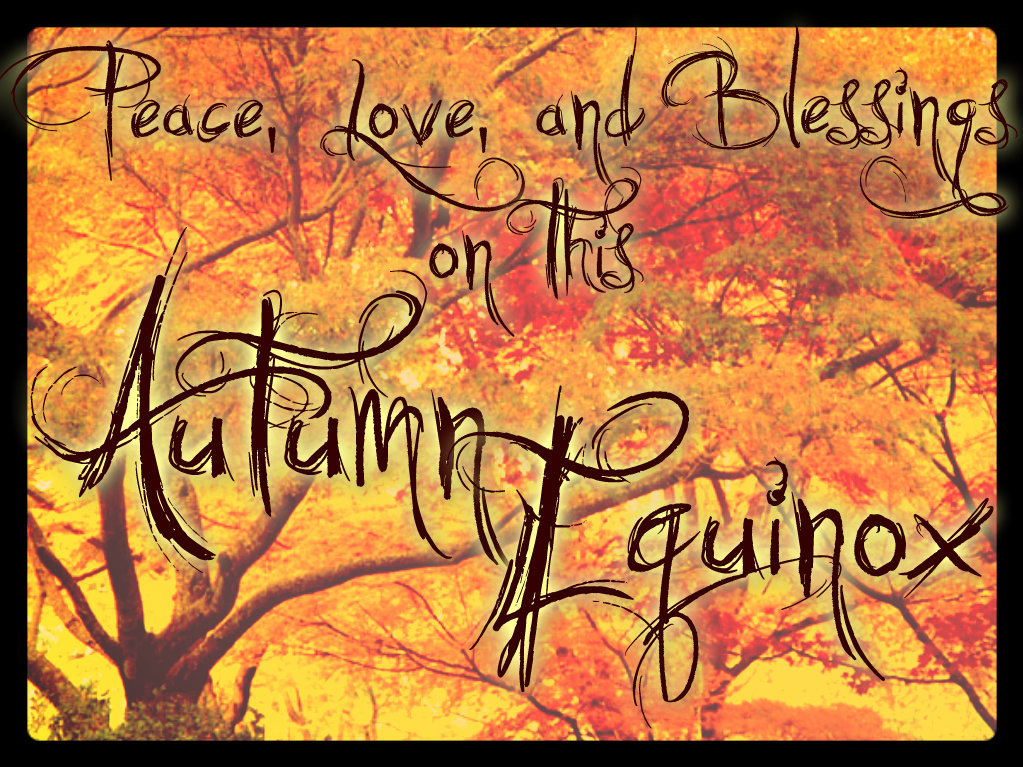 We hope all her Pagan and Wiccan families and friends enjoy the  Autumnal Equinox today.

The autumnal equinox ushers in equal day and night around the globe, and for Pagans and Wiccans, this celestial event brings Mabon—the second harvest festival. As the Earth’s subsolar point crosses the Equator, the planet begins moving southward, increasing darkness in the Northern Hemisphere and light in the Southern Hemisphere. Wiccans use Mabon (or Ostara, in the Southern Hemisphere) as an opportunity for thanksgiving: to welcome the impending dark, to give thanks for the long hours of sunlight of summer and to rejoice in the current bountiful harvest. Spicy mulled wines, crisp apples and warming cider are offered and consumed.

The autumnal equinox falls on September 23 in 2015, marking the official first day of fall as well as the pagan holiday, Mabon, in the northern hemisphere.

Mabon is a harvest festival, the second of three, that encourages pagans to “reap what they sow,” both literally and figuratively. It is the time when night and day stand equal in duration; thus is it a time to express gratitude, complete projects and honor a moment of balance.

“Mabon is a time to reflect on the previous year, when we can celebrate our successes (likened to bringing in the harvest) and assess which crops, projects, or dreams didn’t come to fruition,” the Los Angeles-based pagan leader Laurie Lovekraft told HuffPost.

This is the time to look back not just on the past year, but also your life, and to plan for the future. In the rhythm of the year, Mabon is a time of rest and celebration, after the hard work of gathering the crops. Warm autumn days are followed by chill nights, as the Old Sun God returns to the embrace of the Goddess.

The holiday is named after the Welsh God, Mabon, son of Earth Mother goddess Modron.

Some pagans mark the holiday by enjoying rich feasts with seasonal foods like apples, pomegranates and root vegetables. Many also observe rituals honoring the goddess’transition from mother to crone.