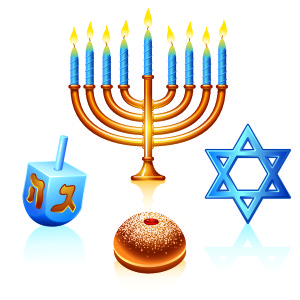 Happy Hanukkah to all our Jewish family and friends.

Hanukkah (alternately spelled Chanukah), meaning “dedication” in Hebrew, refers to the joyous eight-day celebration during which Jews commemorate the victory of the Maccabees over the armies of Syria in 165 B.C.E. and the subsequent liberation and “rededication” of the Temple in Jerusalem. The modern home celebration of Hanukkah centers around the lighting of the hanukkiyah, a special menorah for Hanukkah; foods prepared in oil including latkes (potato pancakes) and sufganiyot (jelly doughnuts); and special songs and games.

Unlike many Jewish holidays, Hanukkah (also known as the Festival of Lights) is not mentioned in the Bible. The historical events upon which the celebration is based are recorded in Maccabees I and II, two books contained within a later collection of writings known as the Apocrypha. Although Hanukkah is considered a “minor” Jewish festival, today it ranks—along with Passover and Purim—as one of the most beloved Jewish family holidays.

In the year 168 B.C.E., the Syrian tyrant Antiochus Epiphanes sent his soldiers to Jerusalem. The Syrians desecrated the Temple, the holiest place for Jews at that time.  Antiochus also abolished Judaism, outlawing the observance of Shabbat and the Festivals, as well as circumcision.  Altars and idols were set up for the worship of Greek gods and he offered Jews two options:  conversion or death. 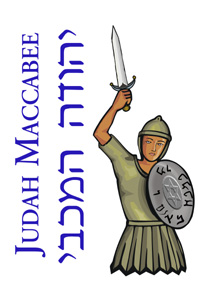 On the 25th day of the Hebrew month of Kislev in 168 B.C.E., the Temple was renamed for the Greek god Zeus. A resistance movement— led by a priestly family known as the Hasmoneans, or Maccabees—developed against the cruelty of Antiochus. The head of the family was Mattathias, an elderly man.  His son, Judah, became the chief strategist and military leader of the resistance. Though outnumbered, Judah Maccabee and his fighters miraculously won two major battles, routing the Syrians decisively.

Although historians debate the causes and outcomes of the war in which Judah Maccabee and his followers defeated the Syrian armies of Antiochus, there is no doubt that Hanukkah evokes stirring images of Jewish valor against overwhelming odds. Other themes rooted in the observance of the holiday include the refusal to submit to the religious demands of an empire practicing idolatry, the struggle against total assimilation into Hellenistic culture and loss of Jewish identity, and the fight for Jewish political autonomy and self-determination.

Hanukkah, which means “dedication,” is the festival that commemorates the purification and rededication of the Temple following the defilement caused by the Greeks during their occupation of that holy place. Today, the holiday reminds Jews to rededicate themselves to stand against forces that would destroy Judaism and to keep alive the flame of Jewish religion, culture, and peoplehood so that it may be passed on to the next generation.

Originally, the eight-day holiday was intended to parallel the eight-day festival of Sukkot. The Books of the Maccabees made no mention of the legend concerning a small jar of oil that unexpectedly lasted for eight days.  Only centuries after the Maccabees’ defeat of the Syrians did the story of the jar of oil—which has come to be a part of Hanukkah—appear in the Talmud.

According to the legend, when the Maccabees entered the Temple and began to reclaim it from the Greeks, they immediately relit the ner tamid (eternal light), which burned constantly in the Temple and has a parallel in our synagogues to this day. In the Temple, they found a single jar of oil, which was sufficient for only one day. The messenger who was sent to secure additional oil took eight days to complete his mission, and miraculously, the single jar of oil continued to burn until his return. The rabbis of the Talmud attributed the eight days of Hanukkah to the miracle of this single jar of oil.

Although the practice of lighting the menorah was common throughout much of the 19th century, North American Jews tended to 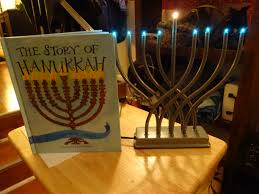 neglect most of the other traditions and practices associated with the holiday.  By the 1920s, however, Jews increasingly added gift-giving to their Hanukkah celebrations, prompting Christians to refer to Hanukkah as the “Jewish Christmas.”

Like many aspects of Jewish religious practice, the transformation of Hanukkah was linked to the growth of North American Jewry within its unique environment. The elevation of Hanukkah to a major holiday was the result of Jews acculturating themselves to a North America that was overwhelmingly Christian in population and symbols.

Although Hanukkah had become an important holiday among North American Jews by the 1920s, it would be incorrect to regard it as an imitation of Christmas with an emphasis on the exchange of presents. Rather, North American Jews use this holiday as a celebration of family, reinforcing Jewish identity in a place whose population may be overwhelmingly Christian but in which Jews feel at home. Hanukkah, therefore, is a means for North American Jews to feel a kinship with their neighbors, while simultaneously asserting their Jewish distinctiveness.

Ma’Oz Tzur (“Rock of Ages”), a Hanukkah song, traditionally is sung after the lighting of the candles each night, and at other times throughout the holiday. It was composed in Europe in the 12th or 13th century.

“I Have a Little Dreidel” is a modern-day children’s song frequently sung during the Festival of Lights.  Other holiday favorites include “Hanukkah, Oh Hanukkah,” “Sivivon, sov, sov, sov,” a Hebrew folksong, “Light One Candle,” written by Peter Yarrow, and “The Latke Song,” by Debbie Friedman, z.’l., the renowned Jewish singer and songwriter.

Ritual objects associated with Hanukkah include the menorah and the dreidel. 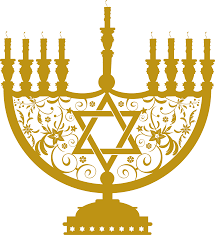 Menorah is a Hebrew word meaning “candelabrum” and refers to the nine-branched ceremonial lamp in which the Hanukkah candles are placed and blessed each night of the holiday.  The nine branches include eight branches, one for each day of the holiday, and one branch for the shamash (servant) candle that is used to light the other candles. In ancient times, oil was used in the menorah. Over time, candles were substituted for oil. The Hanukkah menorah can also be called a hanukkiyah. (Seven-branched candelabra, one of the major symbols of the State of Israel today, are used for kindling the lights of Shabbat.)

The word dreidel derives from a German word meaning “spinning top,” and is the toy used 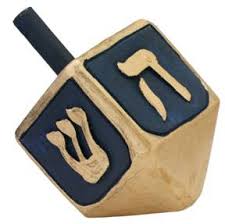 in a Hanukkah game adapted from an old German gambling game. Hanukkah was one of the few times of the year when rabbis permitted games of chance. The four sides of the top bear four Hebrew letters: nun, gimmel, hey, and shin. Players begin by putting into a central pot or “kitty” a certain number of coins, chocolate money known as gelt, nuts, buttons or other small objects. Each player in turn spins the dreidel and proceeds as follows:

Over time, the letters on the dreidel were reinterpreted to stand for the first letter of each word in the Hebrew statement “Neis gadol hayah sham,” which means “A great miracle happened there” and refers to the defeat of the Syrian army and the re-dedication of the Temple.  In Israel, one letter on the dreidel differs from thos eused in the rest of the world. The shin has been replaced with a pey, transforming the Hebrew statement into Neis gadol hayah po, which means“A great miracle happened here.” 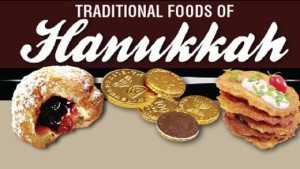 Latkes (potato pancakes) and sufganiyot (jelly donuts)—foods cooked in oil—are traditionally eaten during Hanukkah and serve as a symbol of the legend of the jar of oil that lasted for eight days.  In Israel, pastry shops specialize in creating delicious and creative sufganiyot.

Worship services held during Hanukkah include the al hanissim (“for the miracles”) passage in the Amidah (the central prayer in worship, recited while standing) and in Birkat HaMazon (the blessing after meals).

The Torah reading for each day of Hanukkah is taken from Numbers 6:22-8:4, which recounts the dedication of the mishkan 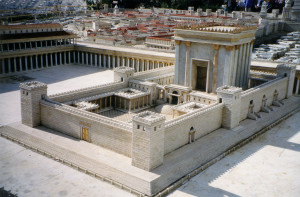 (temporary, moveable place of worship) by the Israelites in the desert. On Shabbat during Hanukkah, we read the regular weekly portion. During the Festival of Lights, the Haftarah readings, additional selections from the Prophetic books, are Zechariah 4:1-7 and I Kings 7:40-50.

Hanukkah, a holiday primarily celebrated at home, begins on the 25th day of the Hebrew month of Kislev and is observed for eight days.  In the Talmud, the rabbis taught that the mitzvah of Hanukkah, the commandment at the heart of the observance of the holiday, is a “candle for each man and his household.”  Hence, the actual mitzvah, or commandment, of Hanukkah is to kindle the Hanukkah lights in one’s home. Blessings are recited over lighting the candles. One candle is lit for each night. The candle for the first night is put on the right side of the eight-branched menorah. On each subsequent night, an additional candle is placed to the immediate left of the previous night’s candle, and the candles are lit from left to right, so that the kindling begins with the newest light. Since these lights are holy, it is forbidden to make practical use of them; therefore, a special shamash (servant) candle is used to light the others. 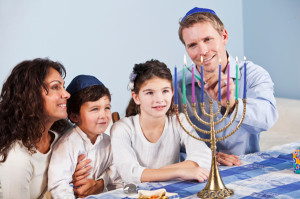 In some families, each member of the household, including the children, lights his or her own Hanukkah menorah. Many families use the eight-day period of Hanukkah to spend time together each night.

Another mitzvah of Hanukkah is pirsum hanes, the public proclamation of the miraculous events that transpired in the days of the Maccabees. A number of features of Hanukkah observance are connected with this requirement. The Hanukkah lights are lit at sundown, the time when passers-by are most likely to see them. When possible, the menorah is placed in a window or elsewhere in the home so that it can be seen from the outside.  This custom is especially prevalent in Israel, where cities and towns hold public menorah-lighting ceremonies and the entire country is full of candles, bright with the celebration of the Festival of Lights.

Any member or members of the family may chant or recite the blessings. One person lights and holds the shamash, the blessings 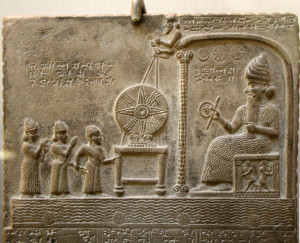 are pronounced, and then the candles are lit (from left to right, so that the kindling begins with the newest light).

Two blessings are chanted or recited every night of Hanukkah. The first is a blessing over the candles themselves. The second blessing expresses thanks for the miracle of deliverance. A third blessing—the Shehecheyanu prayer, marking all joyous occasions in Jewish life—is chanted or recited only on the first night.

Preparing for the Holiday

To prepare for Hanukkah, make sure you have candles and a menorah, or, as is the custom in some families, one for each member of the family.  You also can decide together how they will celebrate each night of the holiday—whether with activities, cooking, or bringing a social justice element to the holiday.