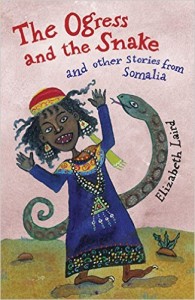 Parents/Guardians and friends, we have been looking to gather our database of Somali folk tales. Please check the information below to see if it is accurate. Any changes/translations that need to be made it would be appreicated if you could let us know. If you have any Somali Folk tales or myths that you would be willing to share with us, we would be delighted. Thank you.

Myth: a traditional story, especially one which explains the early history, a cultural belief, or cultural practice of a group of people.
Folktale:  a story passed on by word of mouth, rather than by writing, and that expresses the traditions of a culture.  The category includes legends, fables, jokes, and fairy tales.  Many folktales involve mythical creatures and magical transformations.
Somalis have a rich oral tradition when it comes to ancient folktales, passing on stories by word of mouth from generation to generation.

Retold by Said Salah Ahmed, Illustrated by Kelly Dupre. This traditional Somali folktale tells an animal fable about the misuse of power. The animals all work together to kill a camel, but then the lion comes and demands that they give him a share. Although he did none of the work, he ends up with most of the camel, prompting the other animals to say, “The lion’s share is not fair.” The Lion’s Share/Qayb Libaax Reading Guide Book and reading guide also available in Somali. Videos of The Lion’s Share read in English and Somali. Download a PDF copy of The Lion’s Share.

Retold by Marian A. Hassan, Illustrated by Betsy Bowen.
In this hair-raising cautionary tale from Somalia, the Hargega Valley is plagued by the monstrous Dhegdheer, a witch who gobbles up anyone unlucky enough to cross her path. A widow and her young son try to escape her. Will they be Dhegdheer’s next meal or will their virtue save them and help bring an end to Dhegdheer’s reign of terror?
Dhegdheer: A Scary Somali Folktale Reading Guide
Book and reading guide also available in Somali. Author Marian Hassan and Said Salah Ahmed read and discuss Dhegdheer. Download a PDF copy of Dhegdheer, A Scary Somali Folktale

Retold by Kathleen Moriarty, Illustrated by Amin Amir. Somali translation by Jamal Adam.
When a wise Somali leader asks the men in his province to bring him the part of a sheep that best symbolizes what can divide men or unite them as one, most present him with prime cuts of meat. But one very poor man’s daughter has a different idea. In this clever folktale, a father reluctantly follows his daughter’s advice and has astonishing results.
Wiil Waal, A Somali Folktale Reading Guide
Book and reading guide also available in Somali. Kathleen Moriarity, Jamal Adam, and Omar Hersi read and discuss Wiil Waal. Download a PDF copy of Wiil Waal: A Somali Folktale.

Retold by Kelly Dupre, Illustrated by Amin Amir. Somali translation by Said Salah Ahmed.
The figure of Igal Shidad is a staple in Somali folklore. Like many Somali people, he and his family were nomadic herders of camel and sheep. Thousands of funny stories were told of Igal because even though he was a wise man, he was also known as a coward. Igal’s unreasonable fears caused him much trouble, but with cleverness and faith, he always managed to find solutions to his problems. In this story, Igal walks the drought-stricken Somali landscape, searching for a better home for his family and animals, asking for Allah’s guidance along the way. As he confronts obstacles, both real and imagined, he discovers his prayers can be answered without his even realizing.
The Travels of Igal Shidaad Reading Guide
Book and reading guide also available in Somali. Videos of The Travels of Igal Shidaad read in English and Somali. Download a PDF copy of The Travels of Igal Shidad – Safarada Cigaal Shidaad.

A selection of Somali Folk Tales (from http://hooyo.web.free.fr/E_tale_00.html)