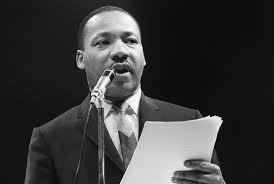 Martin Luther King day is celebrated on the Third Monday in January,

“We will not resort to violence.
We will not degrade ourselves with hatred.
Love will not be returned with hate.”
—Dr. Martin Luther King, Jr

Martin Luther King, Jr. was a civil rights activist in the 1950s and 1960s. He led non-violent protests to fight for the rights of all people including African Americans. He hoped that America and the world could become a colorblind society where race would not impact a person’s civil rights. He is considered one of the great orators of modern times, and his speeches still inspire many to this day.

Where did Martin grow up?

Martin Luther King, Jr. was born in Atlanta, GA on January 15, 1929. He went to Booker T. Washington High School. He was so smart that he skipped two grades in high school. He started his college education at Morehouse College at the young age of fifteen. After getting his degree in sociology from Morehouse, Martin got a divinity degree from Crozer Seminary and then got his doctor’s degree in theology from Boston University.

Martin’s dad was a preacher which inspired Martin to pursue the ministry. He had a younger brother and an older sister. In 1953 he married Coretta Scott. Later, they would have four children including Yolanda, Martin, Dexter, and Bernice. 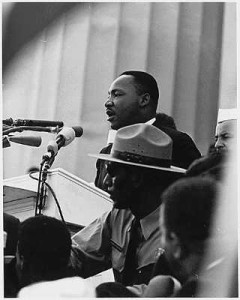 How did he get involved in civil rights?

In his first major civil rights action, Martin Luther King, Jr. led the Montgomery Bus Boycott. This started when Rosa Parks refused to give up her seat on a bus to a white man. She was arrested and spent the night in jail. As a result, Martin helped to organize a boycott of the public transportation system in Montgomery. The boycott lasted for over a year. It was very tense at times. Martin was arrested and his house was bombed. In the end, however, Martin prevailed and segregation on the Montgomery buses came to an end.

When did King give his famous “I Have a Dream” speech?

In 1963, Martin Luther King, Jr. helped to organize the famous “March on Washington”. Over 250,000 people attended this march in an effort to show the importance of civil rights legislation. Some of the issues the march hoped to accomplish included an end to segregation in public schools, protection from police abuse, and to get laws passed that would prevent discrimination in employment.

It was at this march where Martin gave his “I Have a Dream” speech. This speech has become one of the most famous speeches in history. The March on Washington was a great success. The Civil Rights Act was passed a year later in 1964.

How did he die?

Martin Luther King, Jr. was assassinated on April 4. 1968 in Memphis, TN. While standing on the balcony of his hotel, he was shot by James Earl Ray.